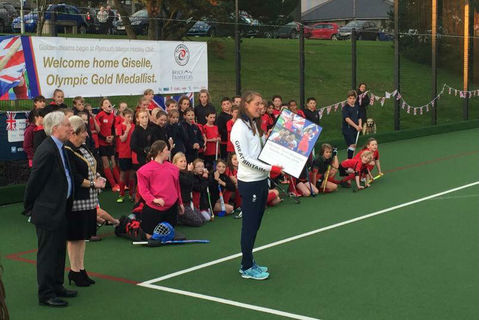 Plymouth Marjon HC is the one of the largest in the South West running teams from U6s through to Veterans, in total over 25 teams. With over 250 members the club based at Plymouth Marjon University will be entering into its 20th season.

We offer structured training sessions for all teams lead by external and internal coaches. We offer bespoke goalkeeper training, and high performance sessions for both ladies and men.

We have an active and thriving junior section, from under 6 to under 18 for boys and girls. They have opportunities to train at the weekends and midweek with the chance to play in local leagues and national competitions.

Plymouth Marjon Hockey Club is a registered charity - No. 1131988

In 2016 the club had its proudest moment as former club player Giselle Ansley represented Team GB at the Rio Olympics. As the tournament progressed the team grew in confidence winning every game before the final and then in an epic encounter agianst the reigning  champions defeated Holland on penalties.

In October Giselle returned back to the city to meet hundreds of school pupils and club members on a very memorable day for all those at the club.

Contact us if you are interested in finding out more!  We welcome new players of any age and level, but also get in touch if you'd like to volunteer, officiate or even fundraise with us.